The Avanti BDS reversed phases (C8 and C18) offer a conventional approach to the separation of polar compounds by providing a base deactivated silica and a monomerically bonded linear alkyl functional group. This combination gives excellent performance at low pH but can show some slight tailing with difficult bases at neutral pH. The ultimate performance of these phases was constrained by the need to offer a close alternative to current BDS media.

Polar embedded phases have become a popular approach to improving peak shape with difficult compounds but with the added advantage of delivering alternative selectivity to standard alkyl phases. Rather than just improve the performance of the BDS C18 phase, we decided to incorporate the additional benefits offered by a polar embedded phases.

The objective of the new Avanti phase was to:

These objectives have been achieved with the Avanti BDS Quattro.

Low pH is recommended for mixtures of acids and bases. Trifluoroacetic acid (0.1%) is the preferred modifier being both effective and volatile. The separation of acids and bases using 0.1% TFA is shown in Fig 1 ( attached). The bases are eluted earlier than on conventional BDS phases and as particularly sharp peaks aiding their detection.

This difference in selectivity is highlighted in the separation of a commercial peptide, Bacitracin. The main components of this peptide are basic and are eluted much earlier and with greater resolution from the latter eluting peaks than on a standard base deactivated phase as is shown in Fig 2.

Low pH eluents are recommended for high efficiency separation of all compounds.

Neutral pH conditions are used to provide alternative selectivities to those seen at low pH for bases and neutral compounds. Increased ionization of residual silanols at neutral pH with conventional base deactivated phases leads to much longer retention of bases relative to neutral compounds and a tendency to give tailing peaks with strong bases such as Amitriptyline. Acids are seldom chromatographed at this pH due to low retention of the ionised salt.

Avanti BDS Quattro is ideal for bases and neutrals at this pH, giving excellent peak shapes for strong bases. This is shown in Fig 3 where the separation of a range of strong bases, including some identified by McCalley et al as being particularly difficult to elute with symmetrical peaks, is illustrated.

The high base deactivation of Avanti BDS Quattro is illustrated by a much reduced retention of bases compared with conventional base deactivated media.

This is illustrated using the conditions published by Waters Inc. This test uses a 65% MeOH/35% 20 mM potassium phosphate pH 7 eluent with Amitriptyline and Acenaphthene solutes. Hydrophobicity is indicated by ln k’ Acenaphthene while silanol activity is measured by the ln k’Amit/k’ Acen. While the published data are limited by giving no indication of the degree of Amitriptyline tailing, it does help differentiate packings which appear quite similar at low pH.

A plot of the above test is shown overleaf. 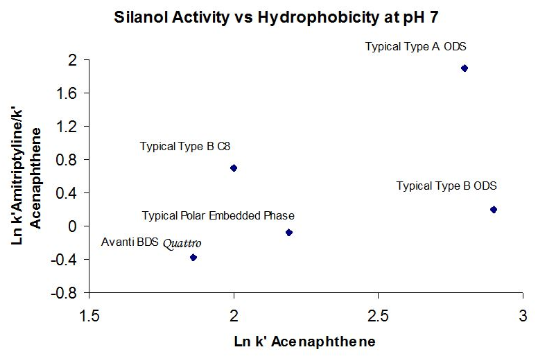 Conventional Type B phases retain Amitriptyline more than Acenaphthene while polar embedded phases show similar retention of both compounds. In contrast, Avanti BDS Quattro shows a reversal of elution demonstrating its superior base deactivation. The high retention of bases at pH 7 on conventional BDS phases requires the use of high levels of organic modifier to achieve reasonable retention times. This can give problems due to buffer precipitation. The much lower retention on the Avanti BDS Quattro (approximately 5 fold lower k’ than Type B C18 and 3 fold lower than C8) eliminates this problem.

Phosphate buffers as used in this example cannot readily be used with LC/MS but the base deactivation of the Avanti BDS Quattro is so effective that remarkably low ionic strength, volatile modifiers such as 5 mM ammonium acetate can be used while maintaining good peak shape. 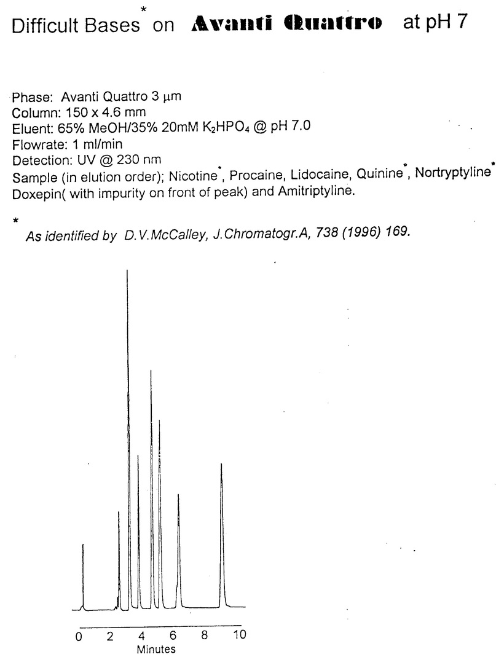