Synthetic polyelectrolytes form a group of polymers, which combine water solubility together with an ionic charge. These two properties allow SP to affect a wide range of properties ranging from flocculation to stabilisation. This has led to their being used in an extensive range of applications from oil recovery, through detergents/cosmetics, foodstuffs to drug delivery systems.

Many biological molecules are polyelectrolytes but generally differ in having a more complex structure.

As with all polymers, molecular weight distribution is a key parameter in defining performance and properties but synthetic polyelectrolytes have proved difficult to chromatograph due to the potentially strong interaction of the charged polymer with the stationary phase. This is particularly the case with cationic polymers as most surfaces carry a negative charge and many of the polymers are designed to interact with surfaces. This proves a challenge to the use of conventional GPC/GFC phases for the analysis of molecular weight distribution.

The extensively deactivated polar surface of the Exsil GFC range of phases allows the separation of both polyanionic and polycationic with minimal apparent interaction with the stationary phase.

These polymers pose the greatest problem to effective GFC analysis as they carry a positive charge while most surfaces, including silica are negatively charged. A significant application for these polymers is as flocculants and dewatering agents, which relies on strong adsorption of the polymer onto surfaces. Similar interaction with unsuitable GFC media would lead to adsorption effects resulting in polymers eluting after the total permeation volume.

This cationic polymer elutes with no indication of adsorption using a relatively moderate eluent avoiding the need for excessive levels of salt or using pH extremes. Volatile ammonium formate allows the use of an ELSD detector for high sensitivity of this non-UV active polymer.

The sample is partially excluded from the Exsil GFC 3000 phase but a change to the Exsil GFC 5000 phase gives a better picture of the molecular weight distribution. 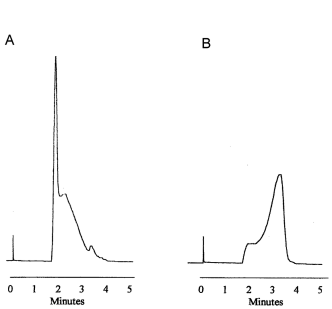 This higher molecular weight polymer requires the larger pore diameter of the Exsil GFC 5000 (800A) phase to allow full permeation.The low adsorptive properties of the Exsil GFC range allows the use of low concentrations of ionic modifier,in this case down to 50 mM.

The following chromatograms show the chain extension effect of lowering the ionic strength. This results in an increase in the hydrodynamic volume of the polymer leading to greater exclusion and earlier elution.

Even with only 50 mM ionic strength, there is no indication of late elution due to adsorption effects 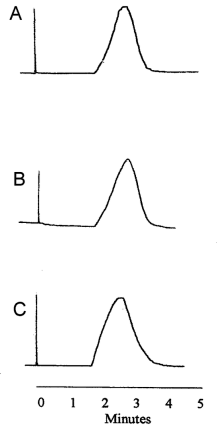 Two low molecular weight polyethyleneimines (0.9kD and 1.5kD) and a higher MW (25kD) are separated on the Exsil GFC3000 again with no indication of adsorption that, if present, would lead to elution after the permeation volume of 3.3 ml. 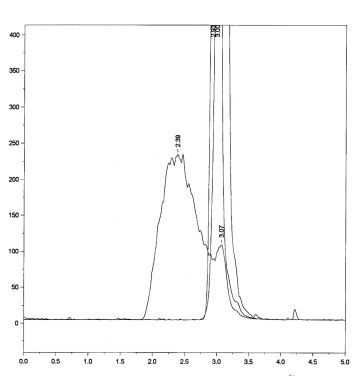 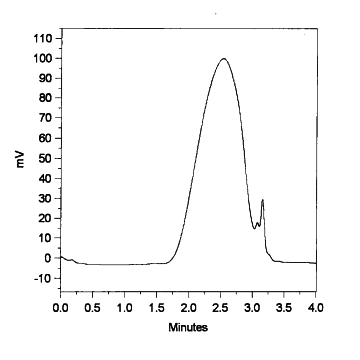 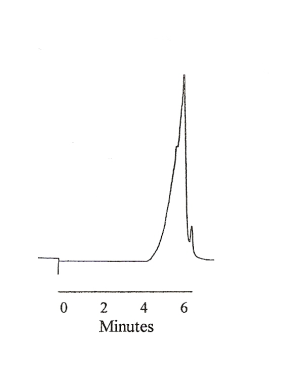